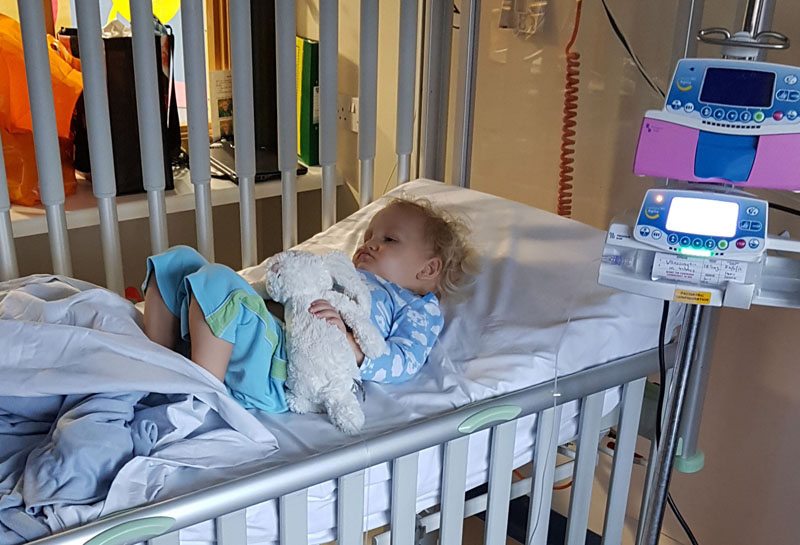 We had been told that we were facing leukaemia, but there was a question mark over which type. The only way to know conclusively, was for Joshua to have a bone marrow aspiration. This procedure is done under general anaesthetic for little children. They essentially stick a tiny apple corer into the back of his hip. This removes some of the spongy tissue that creates white blood cells. This sample can then be analysed under a microscope.

Rachel, our consultant, was trying not to give Joshua too many general anaesthetics, so there was a slight delay in getting this done. The most common form of leukaemia – which is Acute Lymphoblastic Leukaemia (ALL) – was being suggested, but something wasn’t quite sitting right with their initial assessment. So before they could start his treatment, they had to get this result.

This was the hardest 24 hours. We had just received this massive blow to our life, but still didn’t know how big this blow would be. I had a constant knot in my stomach; it was a tense night and day waiting for the diagnosis. I was so worried that it would turn out to be some horridly aggressive, unusual form of blood cancer (which may not have a good outcome).

Confirming that it was ALL, is a really strange position to find yourself in. Essentially cheering: “oh great! it’s just the usual, bog standard form of leukaemia. Phew!”

But I am grateful for that.

ALL is also the most common form of childhood cancer. In the 1960s, it was the most dreaded of all the cancers affecting children; feared because it was usually rapidly fatal. In fact, 50 years ago, it was the second highest cause of death in children. Heavy investment in research means that outcomes are thankfully now much better, with nearly 90% reaching long-term survival.