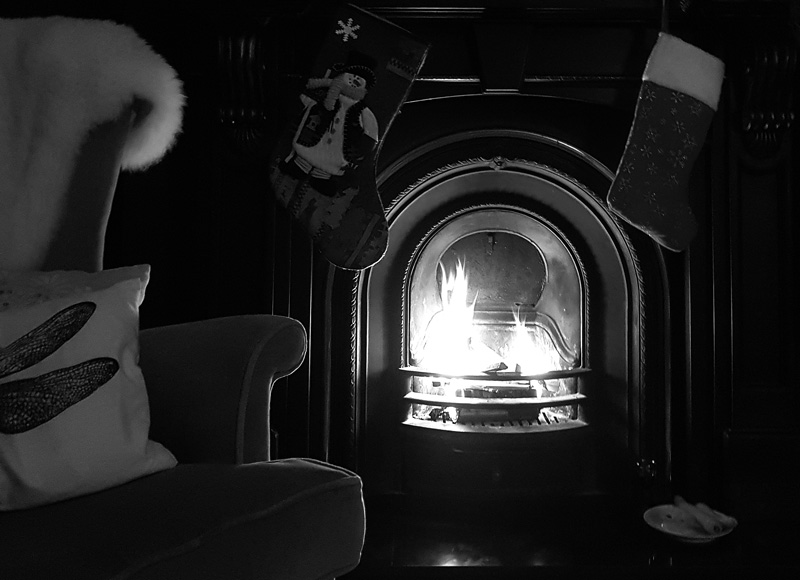 The twinkly lights have been removed and Mrs Christmas is trying to put her feet up, but Joshua is still incessantly singing “Jingle Bells.. batman smells, jingle all the way!” ..right into January.

Last Christmas he was admitted to hospital and I have been rather obsessed with avoiding that this time.

In December 2019, we were feeling relieved that his first block of treatment was over; slight smiles were occurring at the corners of our mouths.  And then at 2am on the 20th December, I woke up because (sleeping next to me) Joshua was very hot and looking distressed. I hurriedly packed our bags, took a taxi to A&E and didn’t get discharged until the 27th.

He was struggling with RSV, a common but quite nasty respiratory virus.

He had an unrelenting temperature of 40 and just lay silently for days, sweating and breathing heavily. At one point his stats looked so bad on paper, that he was inspected by the intensive care nurse. She fortunately decided he didn’t need to be moved to ICU. Just at that point he had requested a few crisps, which reassured me that people who are intensely ill and getting worse, don’t usually fancy nibbling salty snacks.

All four of us had spent the day of Christmas Eve stuck on the ward… then Ben and I split a really-quite-awful-ready-meal between us, before I took Louis home. I still remember this time as one of our worst moments. Waking up on Christmas morning with only half your family, when you should all be together; full of excitement about the broad beardy man’s inverse burglary.

With that memory hanging in my mind, I was determined that somehow this year would be different. Well, as much as I can influence anything at all. There were troublesome medical events occurring, but I’ll talk about that separately.

Ben’s parents live locally and a quiet Christmas with them had been mooted. But with all the national Covid chaos there was hand-wringing, hesitating.. and ohh I don’t knows… maybe a chicken sandwich outside?

Naturally, under these circumstances, it all came down to the wire and a last-minute nasal swab. We got the green flag on the 23rd. Then I panic bought some pheasants, which was all the local butcher had left, just before shutting.

However, despite all the tensions and restrictions, there were some fond festive moments.

Every year, with Ben quietly eye-rolling, we drag an oversized hulk of pine into the lounge. The boys seem to engage with bejewelling it in baubles; clustered together, on just one side.

Joshua and I made a ton of mincemeat with a lot of brandy. You have to enjoy chopping apple into tiny weeny bits. Brandishing a sharp knife is pretty good entertainment though, if you are three years old.

A few days preceding this, Ben made a batch of mince pies from a jar that had been knocking around in the cupboard. I worked out after all the family had eaten one, that it was probably five years old. They smelt funny whilst cooking in the oven. The internet wasn’t helping… “Bitter almonds contain toxic poisoning which can cause accidental death”. I then spent the evening panic watching the children. We all seem to still be here.

I do love Christmas eve. Even in 2020… It’s the anticipation.

With jeans under sequin skirts, I met my friend for 5pm prosecco chat outside, around a re-purposed flaming bbq. Then back home for HOURS of present wrapping. When I’m still up selotaping at midnight, I regret not being an organised person.

Joshua is now at that age where he understands the Christmas mythology and is excited by all of it. The snow! The reindeer! PRESENNNNNNNNNNNNNNNNTS. Louis is nearly eight and very suspicious of the whole Santa story, but is probably suspending his cynicism because he doesn’t want to risk his haul of goodies not appearing.

They were both up before daylight in a frenzy of ripping.

Under a welcome blue sky, we trundled to the grandparents’ house for a sleep-over. This was wildly exciting to two small boys who pretty much haven’t stepped foot in anyone else’s house this year.

Most of the big day, when not gorging on rich food, was spent fighting over who was riding the buzzingly loud, electric motorcycle present. A total bargain from Aldi apparently. In Granny’s house, you can go round and round and round in a circle weaving through the rooms.

This motorcycle is actually a quick response ambulance, and Joshua is a very attentive medic. “I’m here! Do you need help??” A stethoscope is then swiftly whipped out from the pannier (he’s very familiar with how to use one) the patient is given a lot of hands-on time and the diagnosis concluded as: “you have slugs in your chest.”

Hmmmmm… too much inappropriate viewing of Harry Potter perhaps. 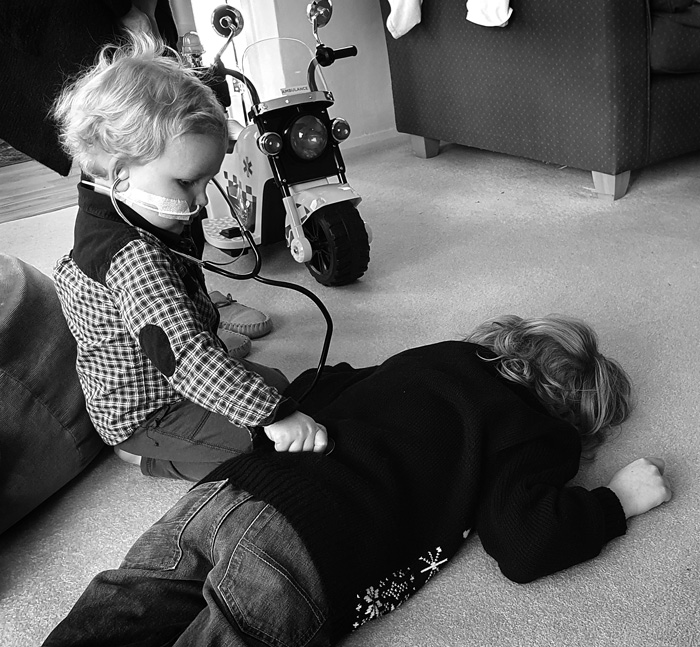 Our Christmas gifts this year, were various types of skateboard. Paved footpaths with varying slopes are now our main source of entertainment in the Time of Virus. So that’s where I will be now, in this hinterland of strangeness… Standing on the pavement as the Health & Safety Monitor, in our allotted hour of exercise.