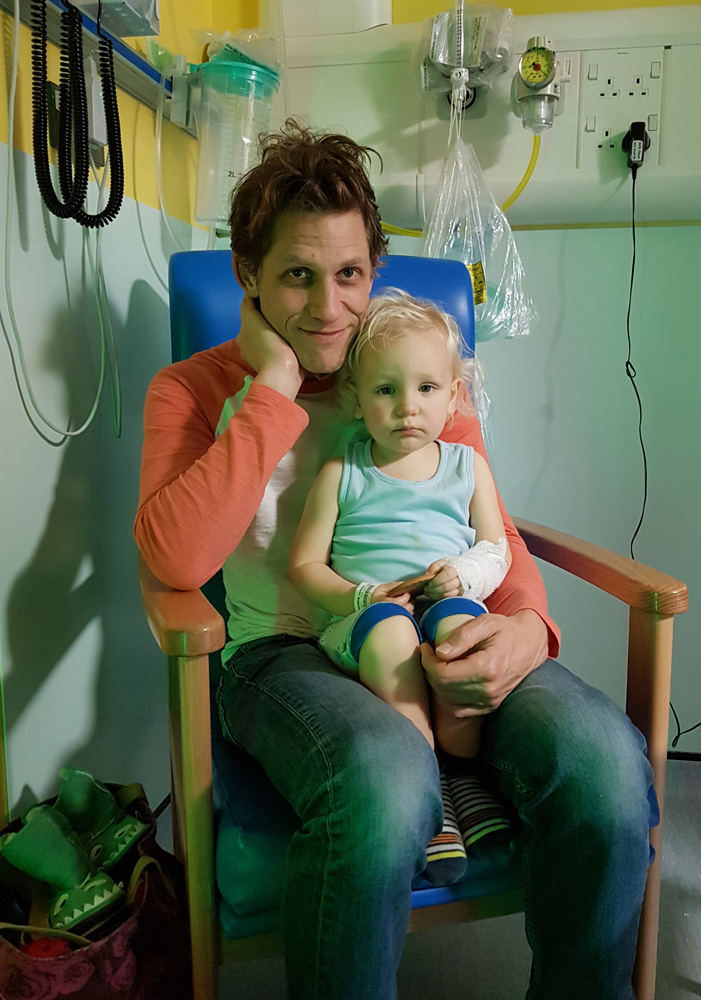 On the Monday morning, I had to actually wake you up at 8am, which has never happened before. You are always up at 6am or earlier. We did the school run and by the time we got home, you were falling asleep in my lap. I was adamant about seeing the GP. They don’t muck about with children under 5; so despite being a busy, inner-city practice, I got an appointment at 2pm.

I carried you in to see this lovely Irish lass who took one look at you and immediately phoned the children’s hospital, under the guise of needing a blood test that she couldn’t do. With the phone tucked in her ear, busy exaggerating things to get you in there, she did basic tests “oh yes, yes… sure, I’ll listen to his chest now”.

Off the phone, she quietly said: “do you want to ask me anything about this?” I silently shook my head. All too aware of the implications of our referral to hospital.

I’m intensely grateful to Dr Guest for not palming me off with some shit about him seeming fine, come back next week if you’re still worried.

I stuffed you in to your outdoor onesie and pedalled straight to a busy, winter A&E department. (disclaimer: we ride everywhere in an electric cargo bike. On reflection, I wondered if this was an inappropriate method of transport for a sick child… but the upsides were we could get there in 10minutes flat, bypassing all the traffic, and park literally outside the front door.)

Due to being so ill, you were placid and easy to manage in the packed waiting room, with Wallace and Gromit on repeat. Soon enough a registrar  appeared to do some prodding. Then a nurse was sticking pads all over your chest to monitor your heart pattern (ECG).

Half an hour later, we were in a silent, gloomy ultrasound room (which reminded me of the joys and sadnesses of pregnancy). It was so quiet in there, that somehow you snoozed your way through the abdominal ultrasound. A toddler first, for the female sonographer apparently. A hint of things to come, was that your liver was unusually large.

A chest x-ray revealed nothing out of the ordinary.

Back in A&E, it was approaching 8pm, with the noises of an increasingly busy unit rising steadily. My lovely friend, who happens to work there, had the foresight to bring us food. My other son was having the surprising (but deliriously exciting) outcome of a mid-week sleepover at her house with their 3 boys. (I’m sorry.)

It’s hard to know what effect this bewildering environment had on Joshua. But, he was clutching a digestive biscuit for hours. Like some talisman he couldn’t relinquish, or eat.

Eventually, Ann the consultant came to usher us in to the quiet side room. I had that sinking feeling that all was not well. She began talking; there were still lots of factors that didn’t quite add up, which still needed investigation. I glanced at the face of the young registrar whose hollow eyes were etched with concern. Ben was still throwing us life lines: “well it must be this.. because of that.. and this element doesn’t make sense. It must be just a blah blah blah”.  They disappeared again, awaiting some analysis.

Time rolled by and Vasiliki, the haematology registrar came in (a specialist in blood disorders). We had not met before, and she began solemnly talking about leukaemia, which was not something that had been mentioned yet. Joshua was sat on my lap, I closed my eyes and buried my face into his soft, curly hair. Unable to focus on what she was saying.

Ben stopped her. “Wait. We haven’t been told that this is his diagnosis.”

I don’t blame the staff. It is always horrendously busy in A&E. But something had been missed in translation between the departments and we weren’t exactly given the softly, softly, hand-holding blow of huge news, with: “would you like a minute alone?” It was just straight into cold information and awkwardness.

By 10pm our new home had become available up on Starlight ward. In that moment, in silence under strip lighting, it just felt so stark. I was numb. Perhaps having had serious worries for a while, this was just the obvious outcome. Ben however, was completely shocked. I went off to the toilet and came back to find him clutching Joshua and sobbing.