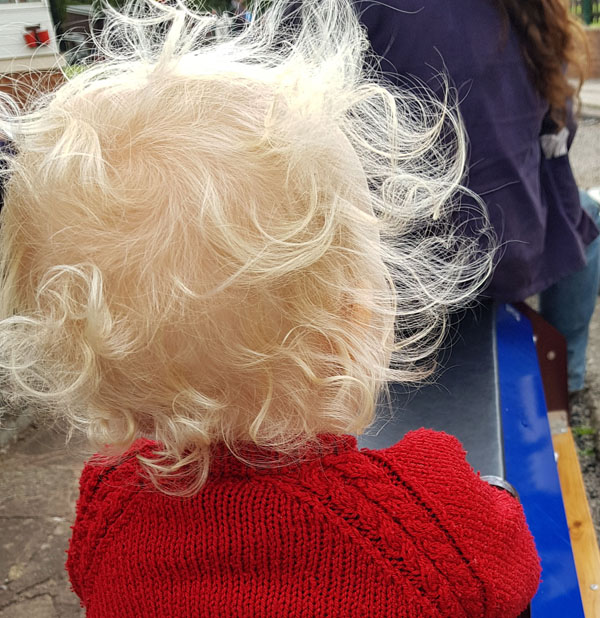 Joshua had bright, flaxen curly locks. His wild, white hair was often one of the first things to be commented on by people. I really loved it. Probably should have trimmed it a bit more than I did, but who cares when you’re 2.

In western culture, lustrous locks are symbolic of health, wellbeing and a quick way to identify someone. Blonde Ruth has been my moniker since the 90s. (I’m not actually blonde anymore. But that’s beside the point, ok?)

Losing your hair, represents a loss of that health and loss of identity. (My thoughts are just straying to the army, and prisoner camps; two places where shaven heads is a bit of a thing…)

Despite everything that was about to happen to Joshua, knowing that his hair would fall out, made me very sad. It’s part of him, part of his personality. It vanishing is a visual reminder of all being so very not well. I did keep arguing with myself. It’s only hair. It will grow back.

When we first arrived at hospital in the dark night; I caught glimpses of other children in their rooms on the ward. Pale, lying in beds, with wispy bald heads. To me at that time, through the glass in the gloomy light, they appeared like haunted, tragic figures. In stunned shock, I couldn’t quite believe that we belonged there. That this was our life now.

During our first few weeks on the unit, I would gently snip out a few of his curls from the back. I felt strangely reluctant, which is odd given that they were due to slowly fall out anyway. I felt like I had cut off loads of them, but now I realise that I hadn’t. It’s a strange unwillingness to be complicit in his impending baldness.

His hair falling out was quite a protracted process; it wasn’t here one day and then gone the next. In December last year, he spent a lot of time sat on my lap; I kept finding lots of strands of hair stuck to my jumper, getting in my mouth or wafting across the kitchen table.

He had scraps of hair for a while. And then he went through treatment intensification, which wiped it all out.

Before Covid arrived, we would be out together in the park or on the school run. And I became very aware that people notice the bald child. The eyes flicker; the pitying glances that last a bit too long. They know something of your situation because of how he looks. I didn’t like that. I didn’t like that he was so obviously sick. The tragic figure.

It’s growing back now. It’s a few millimetres long and I find my hand stroking it when he’s flopped across my lap; it’s silky soft. Like moleskin.

I have no idea what it will look like. Whether it will be blonde. Or curly.

But with its re-growth is a sparkly sense of renewal and quiet relief. It feels like something positive. A return to normal, even if that normal is really still years away.