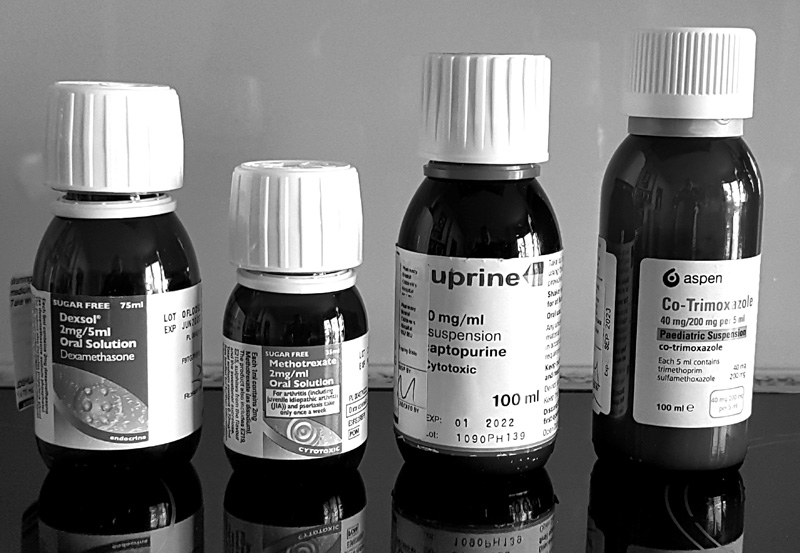 “How are things now? Is Joshua still on medication?” I get asked this sort of question, quite a lot. Friends are often surprised that he still has chemotherapy every day. I can see that it would be confusing; the treatment plan for children is so very different to anything like the regime an adult would experience.

So where are we up to? His three year treatment plan is split into five chunks. Joshua has been in “Maintenance” since July 2020. This is the fifth, final (extremely long) phase and it will last until Jan 2023. It has to last this long, to prevent the leukaemia coming back.

In Joshua’s case it is a low risk… but there is unfortunately, the shadow lurking nearby, that he could relapse during treatment. Or after it. The consequences of this are huge. But we get through this one by just not thinking about it.

The first eight months of this journey were such an unfathomably difficult time. Relentless medical events were occurring.. and we were constantly going in to the oncology unit for this, that and the other. Plus the hospitalisations due to infection. So I had no expectation of this maintenance phase being any easier. But it is. It’s more manageable. It’s not normal, but it’s not horrendous either.

This is our schedule:

Joshua takes cytotoxic chemotherapy every day. It is administered orally, by us, in the evening. Apparently it tastes like strawberries and he now willingly squirts the syringe into his own mouth. I still have anxiety that he will spit it all over me or Louis. It’s not supposed to touch our skin. But clearly he doesn’t understand that.

Every Wednesday night, he has a lime-coloured drug (Methotrexate) added in. But he doesn’t like the taste of this one, so it goes down his tube.

On Saturdays and Sundays, he has a general-purpose antibiotic twice a day. Just to dampen down infection risk. This one tastes like bananas and is deemed acceptable.

One day I’m hoping Joshua will accept swallowing all his drugs so we can get rid of the tube. He’s still a stubborn 3yr old though, so can’t see that happening anytime soon. Reliably.

Each week we have a visit from one of our nurses; they come to do a finger prick blood test. This is to monitor his levels of haemoglobin, platelets, neutrophils and white blood count. We are mostly interested in his resistance to infection, because if this drops too much, he has to come off his chemotherapy to let that recover.

Each month (every 4th Friday) he has intravenous chemotherapy through  the port in his chest. Sometimes we go in to hospital for this, but through the pandemic, it was often done at home by our nurse. On that Friday night, he starts a five day course of steroids. Groan. The bit we all come to dread.

Especially if it aligns with me being pre-menstrual. Everybody’s shouting.

Every three months, he goes into hospital, and has a lumbar puncture in surgery. This is to inject chemotherapy into his spinal column, to stop leukaemia cells hiding there. It takes all day, pretty much.

Despite it thinning out again now, his hair grew back in July last year. Some people misinterpret this though, and assume he is no longer in active treatment. As said, he still has the tube, which gets regularly pointed out by other children: “what’s that in his face mummy?” It’s just natural curiosity but it makes me inwardly sigh, regardless. Luckily Joshua doesn’t seem to notice this.

In some ways, it is useful to have the tube. It’s a visual cue to parents I don’t know, that things are not exactly ok. Maybe it prepares them a bit for when I abruptly remove him from any physical encounters with other children.

He’s usually quite a busy bee, but does get out of breath easily and I’ve noticed that he can’t keep up with his friends. He has sadly picked up on this too.

Outside of the relentless trudge through seemingly endless medication…. A continuous challenge now, is going to be getting society to stop assuming that he’s fine, that all is well. To manage expectations of him and remember that he isn’t normal. Not yet.

5 thoughts on “Our Day to Day”