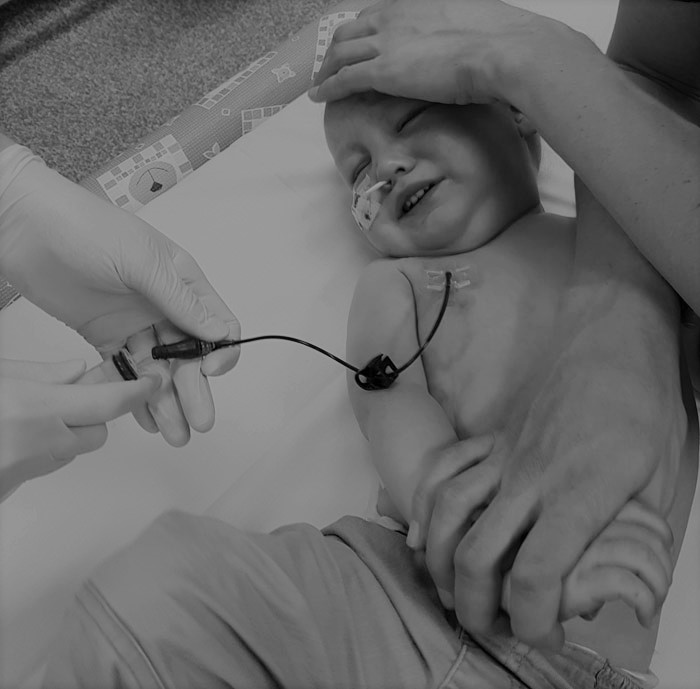 (*I debated with myself about including this image because Joshua looks in distress and Ben is gently restraining him. We have done this procedure countless times and this is the only image I have of it. I took it to record our life. I’ve decided to keep it in, because it’s real and this is what happens regularly.)

When ports work, they are great; instant delivery of medication. When they don’t, it causes a lot of head-scratching, investigations and more time hanging around in hospital.

For reasons I’m not that clear on (maybe his weight fluctuating?) accessing it is often a problem. Accessing is where the nurse sticks a needle into his chest, sucks on the syringe which gets it to easily bleed back into the attached tube. This indicates that it works correctly.

I’m probably making this sound a lot more complicated than it actually is.

It’s 4am. Joshua has a temperature of 39, is angry and also tired because it is the middle of the bleddy night. I’m not overjoyed about it either. We’ve been sat in a side room in A&E for… ummm… a while. He’s been checked over by the nurses and now they want to access his port to administer antibiotics. I quietly enquire about whether they are used to doing this. Maybe we could ask an oncology nurse to come down? Because I know his can be tricky.

Lots of smiling and confidence. “Oh no no, it’ll be fine.”

Three attempts later, flush-faced and flustered they divert to a cannula in the hand instead. I’m grateful for that because Joshua is now in an elevated state of distress.

Cannulas aren’t a good option for more than a day. At Christmas, when we were in for a week, the cannula would fail eventually and get changed over to the other hand.. then his elbow… and possibly a foot as well. In the middle of the night. When he’s asleep.

Two year olds just don’t like being stabbed with needles. Can you imagine waking up to that drama when you’re a child who doesn’t give two shits about why we need to do this?

Eventually on Boxing day, with different senior nurses coming in and trying their luck, Joshua was wheeled off to have his chest x-rayed to see if that would reveal the problem. It did demonstrate that the needle wasn’t in properly. But it has still continued to be tricky, even though they’ve solved that bit.

I guess some things will remain mysterious. And annoying.