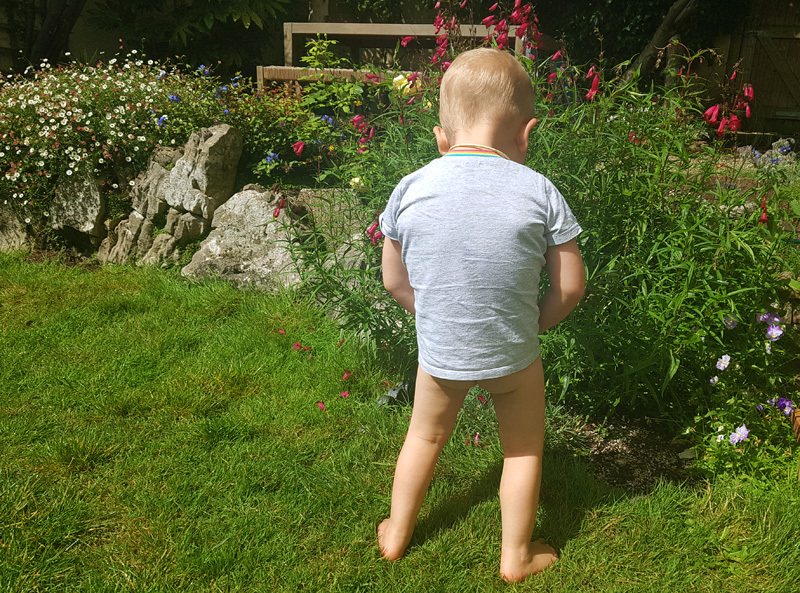 In amongst cancer treatment there is that strange thing called normal life that has to fit around it.

Back in the spring, Joshua was beginning to argue about wearing nappies; his legs kicking me during bum-changing, and then ripping the nappy off immediately afterwards. I could see potty training looming in to view, and I love life without nappies. But his treatment was about to get heavy, so it didn’t seem sensible to have poos plopping on to carpets and urine flowing everywhere.

One of the worst stages of potty training is being trapped in the house for the first week while they learn to manage their uncontrollable bodily functions. But we were stuck in the house anyway due to the international pestilence, so by May it was time to abandon trousers.

For anyone that has forgotten about this business, the quickest route to success is to remove everything and go bare-bummed. They can then see the torrents of wee running down their legs and make the connection. Otherwise there will be endless trouser-washing.

[We had worked out in February that Joshua has good bladder control. Back then we were in hospital and the doctors were wondering why he had a temperature. Maybe it was a urine infection: “can you collect a sample of his wee in this pot please?” Errrrrrrrr. How?

After waiting for two hours to catch this, Ben turned his back and Joshua peed all over the mattress. To ensure that we didn’t miss it next time, we had to wait with his pecker in a plastic pot for THREE WHOLE HOURS. And he wasn’t exactly making this easy; standing up, dancing and parading about. My arm was aching and I was utterly losing the will to live from following his giblets around. And then he let rip like a racehorse. Turns out he didn’t have a urine infection.]

Anyway. In May, the weather was dry and sunny, so we could be in the garden with no pants.

On day one, I was outside with Joshua and turned around to see him weeing into a watering can. After the morning’s continual chat about wee, and that it had to be put somewhere, he just seemed to instantly get it. Three months later and there hasn’t really been any potty training.

There isn’t much that’s been easy in our lives right now, so to have problem-free sailing into toilet-use has been unexpectedly pleasant. But also a bit disappointing! I’d been such a slayer of joy around Ben with my faecal forebodings about how awful potty training was.

I went through it alone with Louis. A week at home with incontinence and then another month of “getting there”. Taking four pairs of trousers to toddler groups and then leaving when we had wet through the final set. Sitting on plastic bags in car seats and buggies. Scrubbing up accidents from the cream carpet. The seemingly endless washing of sheets.

Johsua has had so much to cope with, but on this particular issue, he’s embraced the idea positively and got on with it. So I’m actually pretty proud of him for that. Despite dramatically yelling “I need a WEE!” every day at tea-time; just as we’ve all sat down and the first bite of food is about to touch my lips.

And I can’t blame him for thinking yesterday, that jungle poos in the garden are as legitimate as jungle wees…

One thought on “Potty Training”