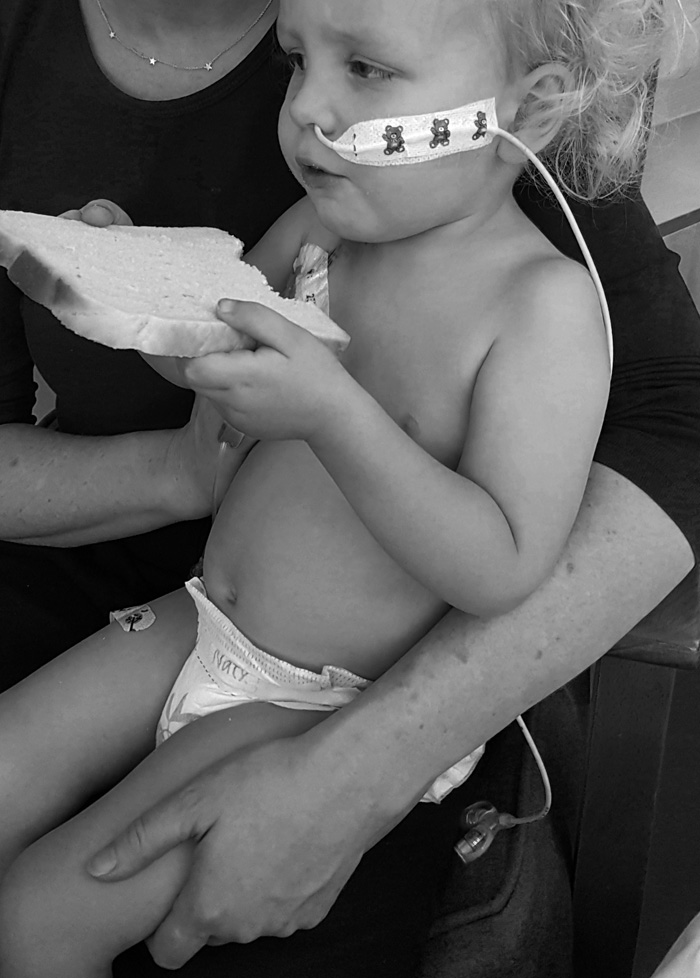 Joshua calls this his pipe. He shouts: “my pipe! my pipe!” if it gets caught on a button or dangles out of his shirt. He’s had this up his nose everyday now for 8 months. It’s become such a part of our life, having this unruly tube swinging around his neck constantly.

Unwell adults don’t usually have nasogastric tubes, because they are capable of swallowing medicine and not gobbing it in your face. Joshua has oral drugs every day; this tube enables us to bypass his mouth and administer them, whether he wants to or not. Getting it installed was the key to us being able to leave hospital after the first few weeks and be independent at home.

Unfortunately, Joshua wasn’t exactly on board with this idea.

His first tube was inserted whilst he was under general anaesthetic. He woke up snorting and pulled it out after about thirty seconds. So for the first week we just muddled along with trying to get the meds into his mouth.

Joshua concluded that he wasn’t terribly keen on taking medicine, so would clench his teeth together to prevent us sticking the syringe into his trap. He quickly mastered tantruming with his teeth clamped shut.

Eventually though, he couldn’t contain the protesting screams and would open up his mouth. The syringe would be waiting, poised for this fleeting moment, ready to squirt the drug in. The nurses taught me to press his cheeks together to try and prevent him spitting it out. This stressful process could sometimes take half an hour with some of it dripping off my top. Some drugs are not critical, but when it’s steroids, we need to know he’s had the correct dose.

And chemotherapy drugs are toxic, we can’t have that splattering our skin. (But it’s ok to put it in my child’s mouth. Still can’t get my head around this)..

My heart was sinking because I knew the nurses would have to insert a tube. And do it with him awake, so he knows what’s happening; which might help him to accept it. But having it put in is a pretty unpleasant procedure.

I mean, would you want a pipe stuffed in your nose, down your throat and into your stomach?

After the event, we had to hold his arms down for hours, whilst he cried, thrashed about and eventually fell asleep. We put mittens on his hands to help stop him getting hold of it. When he woke up, it was like we had broken his spirit. He looked away; just quiet and disengaged.

There was some trouble with it being the incorrect length. It was obviously irritating him, so that required adjustment. To cheer him up we had a short break from hospital and wandered to WHSmiths to scavenge some new Wallace & Gromit DVDs, having exhausted the ones at the unit. Unexpectedly he was sick, whilst in his buggy. Ben saw this unfolding, dealt with it and then had to dash off to locate the shopping centre toilets. I was just stood there in Smiths, gawking. So don’t come to me in a crisis.

I mention this incident, firstly because it shocked me at the time, and secondly because the tube came out with it.

He then had to go through the tube-fitting-trauma all over again.

After a few days, Joshua got used to it, but was continuously pulling an odd face with his lips and talking with a strange ssshing sound. Now it’s just part of the apparatus of life. He still protests a bit when cold water goes down it.

But, he accepts it. When I see him now, a little 2yr old child… diligently tucking his tube back into his top… I have a little gulp of sorrow.  He has so much to accept.

2 thoughts on “The Tube”