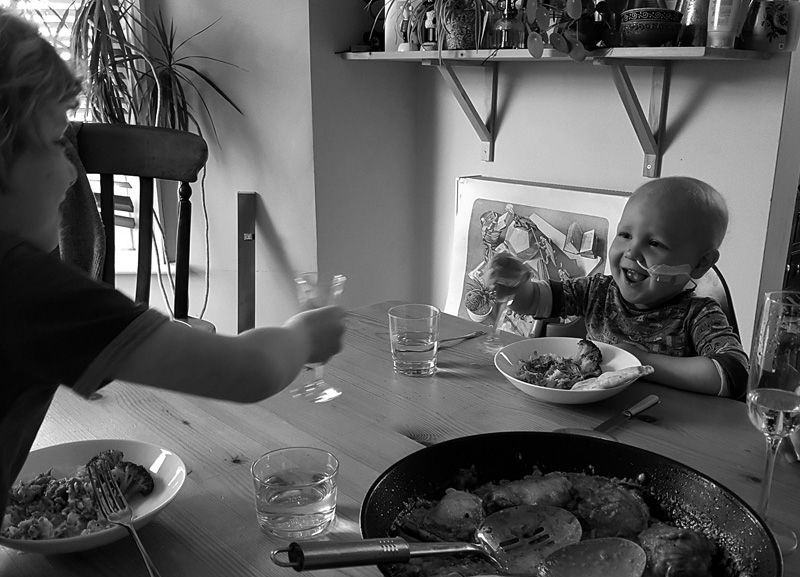 *Joshua celebrating (with apple juice, not sherry…) the end of his intensive phase in June.

After nearly nine months (has it been this long?)… it’s not surprising that a few friends are asking how Joshua’s treatment is progressing. In the first few days of November, one of the most relieving statements made by Dr Rachel, was that they were aiming for a cure. But this comes with the stinging caveat… that this isn’t something they can guarantee.

As I’ve described HERE, he is on a well-trodden pathway with a treatment plan that is split into 5 phases. He is male, so has to be treated for three years (unlike girls who have it for two). If they stop earlier than this, there is a risk that the disease will return.

As he is only 2yrs old, Joshua began on regimen A which is the lowest intensity, offered to children under 10. If they can’t eradicate enough leukaemia cells after the first month, children will be moved up to regimen C, which is the highest intensity.

On 12th December 2019, after the most turbulent and upsetting month of our lives, Joshua was carried into the operating theatre to have a minimal residual disease test (MRD). This is where they remove a small sample of his bone marrow from the back of his hip.

A week later we got the result that the number of leukaemia cells left in his body was under their threshold.. *insert some mathematics here from Dr John that I don’t fully understand*. This was good news because it meant that Joshua can remain on regimen A. Consequently, phase 2 in January was three weeks long not nine, with only two drugs.

Anything involving a little boy taking less drugs and less time having them, was a massive relief to me.

Coming into January and February, we should have been having an easier journey at this point, but as I’ve talked about before, we were having problems with seemingly relentless infections, which meant yet more week-long stays in hospital.

And then of course, humanity’s Covid-curveball hit us all in March.

Given how little the world understood the virus at that time, it was incredibly daunting to be plunging Joshua into his intensive phase during the lockdown. This upsurge in treatment is intended to hammer his remaining leukaemia cells with different heavy-duty drugs.

It seemed like the country was being put on a war footing in late March. So it felt weirdly cavalier to be subjecting him to this, but the oncology team reassured us that other countries (ahead of us in the pandemic) had concluded that the risks to immuno-compromised children from Covid, were not great enough to justify delaying essential cancer treatment.

In June, he moved into the last phase: long-term maintenance. Now, there are (presumably) negligible levels of leukaemia cells left, and the continuing treatment is to keep it that way. There is a risk of relapse. But I don’t want to think about that.

He will still have oral chemotherapy every day (and other things). This relatively small dose suppresses his bone marrow enough to stop it making leukaemia cells, but still enables it to make enough normal blood cells. It’s about getting the balance right. They don’t want to give him too much; that will cause him to become vulnerable to infection (and consequently become ill). But he obviously has to have some. We are still finding the right levels for him.

Our nurse visits us at home each week to take blood, which monitors everything. This is the loathed finger prick test, where they squeeze out a few drops of his blood in to a small vial. Poor Jaydene does not get a welcome reaction to her arrival. “OH NO. NOT JAYDENE! WAAAAAAAAAAAAAAAAAAAAAAAAAAAAAA”. Every. Week.

I wish I could rationalise with him that of all the things he’s had to endure, this is actually quite trivial. But that’s 2yr olds…

Overall, it is welcome to have entered this more manageable phase and with lockdown loosening up (rightly or wrongly) our every day life feels easier. He is now zooming around trying to discover new, imaginative ways to injure himself.

Which is good. Kind of..

One thought on “Treatment Update”